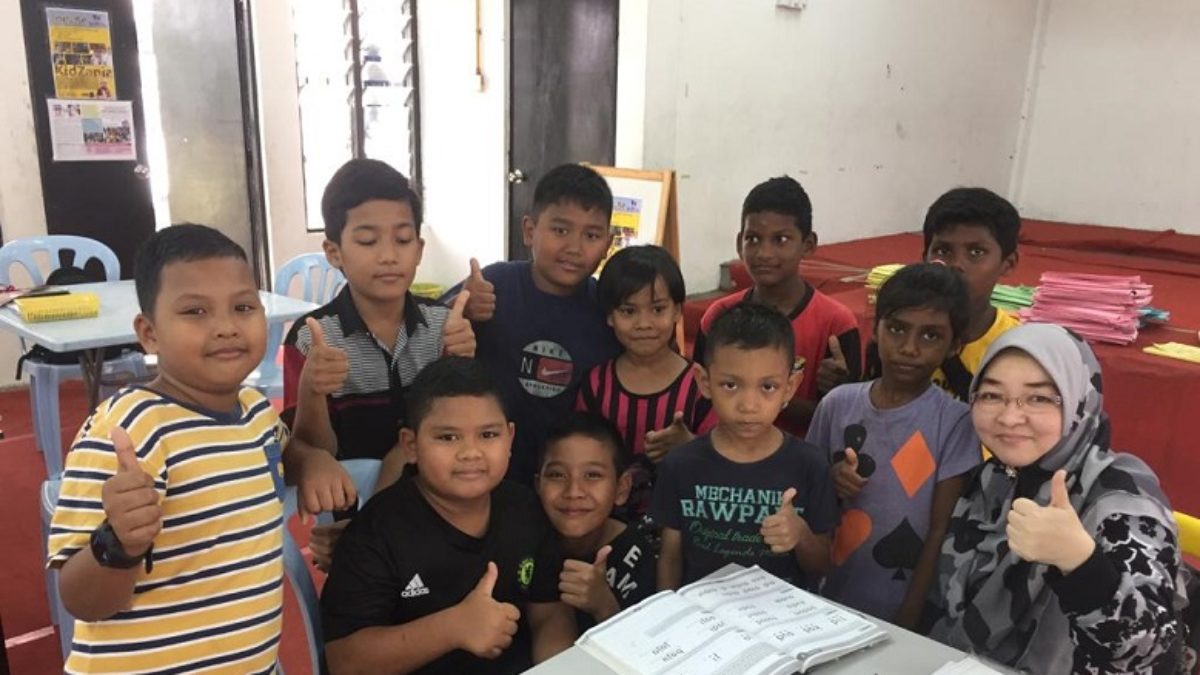 By Vanitha
Don’t mess with a mother on a mission…that’s how it all started for JomBaca i-SINA’s founder Rahmalizah Ali, fondly known as Lizah.
The software engineer who graduated from the University of Manchester never dreamt of the life-altering journey she would be undertaking when she realised that her first born son was unable to read even at age 7.
Juggling work and motherhood, she got into action researching why children faced reading problems. After four years of gathering data and knowledge, Lizah designed a system of phonics applicable for both the Malay and English languages, to create her own modules and reading technique, which she called JomBaca. Using her younger children as test subjects, the mother of five realised that her method could help her children read in both languages by age four.
Feeling motivated by this milestone, Lizah then distributed her module to family, friends and neighbours and it was a matter of time before the success of her creation caught on. The media got wind and Utusan Malaysia soon did a feature on Lizah, after which response to i-SINA’s JomBaca was simply overwhelming.
The immediate rush of phone calls from schools, parents and interest groups seeking to utilise her methods, was particularly shocking for Lizah. “I did not expect the problem to be that massive, to be honest. Schools desperate to solve illiteracy among their students meant only one thing to me – this is a national problem.”

Project JomBaca took wing and with volunteer groups helping her, Lizah implemented her module on its pioneer project at SK Sg.Tua, to great success and there was no looking back. She became a full-time educator.
Since then JomBaca i-SINA has helped countless underprivileged children and illiterate adults. With her team of six full-time teachers, all dedicated professionals trained in the usage of her module, and also funding from several corporate entities and NGOs, Lizah has done numerous tours of duty all over the nation, including with children from Orang Asli settlements and the PPR communities.
The team’s passion and commitment towards helping the disadvantaged with literacy do not waver even though their 20-day intensive programme frequently takes them away from their families.
Each session of JomBaca is conducted for two hours and I-SINA has the capacity to run a maximum of four sessions per day, depending on the volume of students they get. The ratio of teacher to student is 1:10 but it is usually far fewer. To monitor each student’s progress JomBaca i-SINA maintains an assessment book and Lizah hopes to have this record digitized at some point.
The JomBaca module is updated on a need basis and Lizah’s motivation comes from the children as it is they who guide her with what requires tweaking. “To me, this is why I-SINA’s JomBaca is effective. Through trial and error, we are able to pick up on what causes children confusion or difficulty when reading, and work on these aspects and constantly innovate. I feel this is why the success rate of our programmes is between 80 – 90%.”
“Unfortunately, our current education system does not cater for the underprivileged, especially since reading is introduced at pre-school which is not compulsory, and neither is it financially viable for this section of the community to send their children to pre-schools. It’s also unfair to pass the job on to parents,” says Lizah trying to put the scale of the problem in perspective. “Therefore, when a child does not attend pre-school, that opportunity to learn to read is snatched away and the problem then stays with the child throughout his or her school life. This is the sad reality we are faced with now.”
Lizah also observes that in most instances, underprivileged children are not just slow learners but also have other issues such as dyslexia, autism and ADHD. However, teachers at schools are not always trained to detect the symptoms and many of these children go undiagnosed and education becomes a fearful experience for them.
“I work on the principle that whatever circumstances the children are in it’s never their fault. It’s totally unacceptable that students in urban areas about to sit for the SPM lack the ability to read. How is it that something like this can go undetected for 11 years of a child’s educational journey? What then does the future hold for them in today’s challenging world?”

Lizah keeps her objective simple. “I want them to be able to at least read their examination questions so they stand a fair chance at passing and not become dropouts and add to the woes of the nation.”
The source of her joys is simple too: watching students progress from recognising letters – it can be as bad as that sometimes – to words, to sentences, to paragraphs, their confidence growing with their reading.
For JomBaca to reach fruition, Lizah says continuity is important and this is why following her successful 20-day programme, relevant NGOs take over from JomBaca at non-school initiated programmes.
When the programme is conducted at schools there is a smooth transition whereby the teachers take over, but therein lies her greatest challenge. Convincing trained teachers on the effectiveness of her method and modules has been an uphill task, to say the least. “They are so used to their ways and find it difficult to adapt to a new methodology. In fact, I’ve been ridiculed and undermined for my lack of formal teaching background,” the soft-spoken, extremely driven lady says with a wry smile.
Yet, she continues to receive many requests from schools, social workers as well as government and corporate entities to conduct her programme. With JomBaca having 13 years under its belt now, Lizah is also hoping to make an appeal to the education authorities to give a wider berth for her tried and tested reading method.
“My ideal education system? Let’s have a system where children can be themselves, learning what they want to learn without stressing over exams. First and foremost, children need to be happy. It is pointless to learn without progress. There’s so much focus on producing ‘A’s that we have nurtured the unhealthy dependence on after-school tuition as well. Yet, we have a high number of unhappy students who are floating through school life, many unable to read.”
Lizah’s heart clearly lies with the underprivileged as she keeps reiterating that the education system should work for everyone. “Reading serves as a foundation from which children can build on and expand their knowledge base. No child should be left behind. With so much stacked against them already, imagine how much worse their futures will be if these children leave school unable to even read?”

The petite lady with a stout heart beams with pride when she recalls being recognised or greeted by former students, be it from the back of a fast-food cash counter or a shop. It is these moments that give Lizah soul satisfaction; knowing that she has positively touched lives and made a difference. “These children may not become high-flying professionals but I’m happy enough if they can find decent jobs to keep them away from social ills and the streets. Anything beyond that is a bonus.”
Whatever the mode or method, let literacy empower our young with new possibilities, ideas, and experiences. So come one and all, JomBaca.