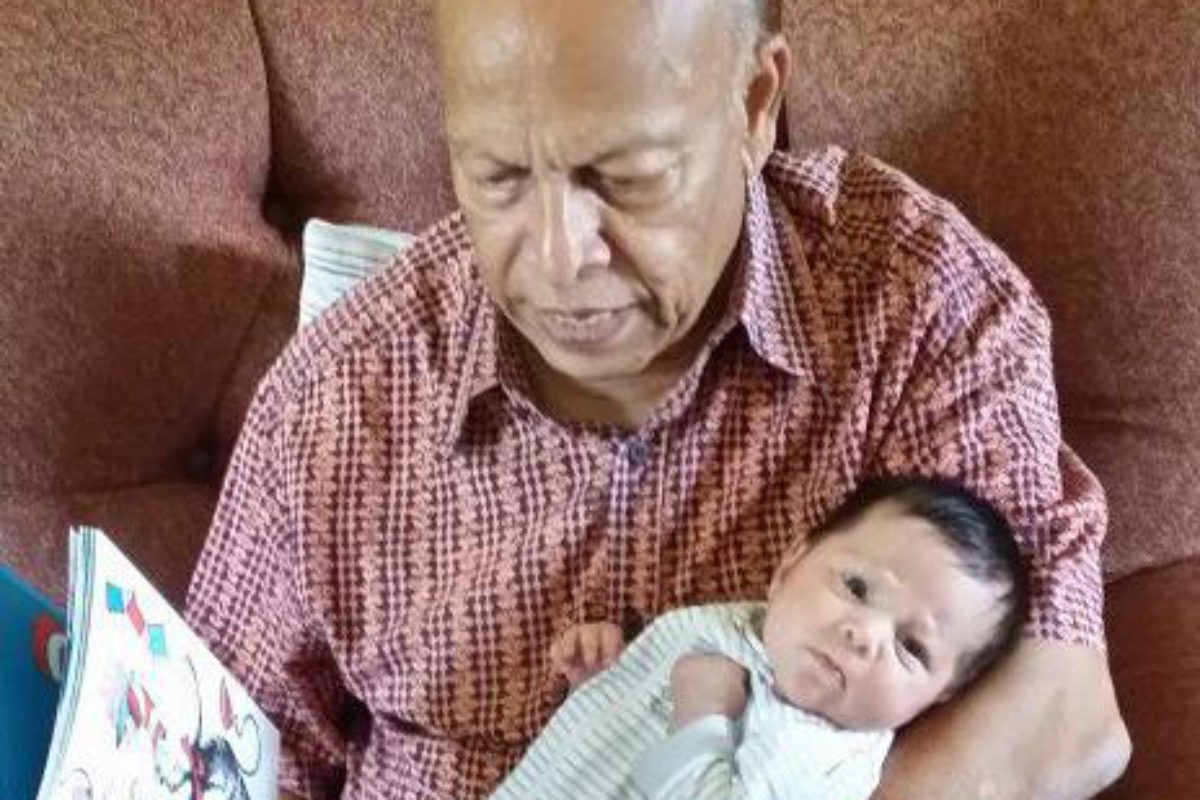 Major (B) Ir. P. Sathyamoorthy is an 81-year-old octogenarian who loves pottering about in the garden of his bungalow in Bangsar- tending to his plants, especially his bananas, plucking them at just the right time for his trademark “kerepek pisang”. From garden to table he makes the delicacy from scratch, by himself.
Cooking is just one of Sathyamoorthy’s many talents. He does a variety of cuisine and regularly churns out delicious dishes to the delight of fortunate family, friends and neighbours. The avid gardener grows many of the herbs and vegetables used in his kitchen, and has the patience and passion for grooming orchids too.
“My mother was my hero, my role model,” begins Sathyamoorthy, the fourth of seven children. “She was determined that all her children should be well-educated and together my parents ensured we had a sound education.”
As a young boy his ambition was to be a teacher but in deference to his father, upon completing his secondary education at Victoria Institution KL, he went to the Brighton College of Technology in the UK, to pursue Electrical Engineering. Between settling into a new culture and the bitter English weather, he fell ill.
There is still a merry twinkle in his eye as he recalls. “The doctor advised me to pick up a hobby to distract me from the pain. I picked up something very English – cross-stitch!” he laughs before adding, “I found that it was actually a good source of income for me as a student.” Needless to say, he learnt the art meticulously and to-date still does intricate pieces.
His impressive home science skills aside, this is the story of Sathyamoorthy, recent awardee for outstanding contribution towards Railway Signalling and Telecom at the “Saluting the Stalwarts” event held in Bangalore, India [main photo]. It is an initiative to honour railway legends, conceptualised by Innovations India.
The award was in recognition of his 32 years of service to the railways industry.
Upon returning to Malaysia after his studies in 1966, Sathyamoorthy started his career with the National Electricity Board [NEB]. “After a short stint with the NEB, I joined Malayan Railways as the first Engineer in the Signalling Department. I was posted as the Signal Engineer (South) covering Kuala Lumpur to Singapore and from Gemas to Tumpat on the east coast. Then in 1969 I was awarded a Colombo Plan Scholarship to undergo a Signalling Course at Secunderabad, India,” he explains, adding that it was in the midst of his course that his marriage was arranged to a beautiful Malaysian lady by the name of Padmavathy. The couple got married in India and went on to have three sons and a daughter. Padmavathy remains his companion, travel partner and pillar of strength.
There are many accomplishments that make Sathyamoorthy a true stalwart.
In 1978 he was promoted as the Head of Department for Signalling which was under the umbrella of the Civil Engineering Department. In his position he proposed and succeeded in making the Signalling Department independent of the Civil Engineering Department. With that, he managed to raise the standard of the Signalling Department.
He also planned proper training for staff below the Engineer level. “Under each of the following 5-year plans, I introduced more modern signalling to replace out-dated ones. I was also responsible for the conversion of open crossings to protected barrier crossings for the whole country.”
In 1993 when Malayan Railways was corporatized as Keretapi Tanah Melayu Berhad, Sathyamoorthy became the Director of Special Projects where he was responsible for, among others, the coordination of all consultants and the completion of the Double Tracking Project from Rawang to Seremban and Sentul to Port Klang.
By the time he officially retired in 1998, he had also obtained the rank of Major (after undergoing army training conducted by the Malayan Railways).
There was to be no real retirement for a man as vastly experienced and talented as Sathyamoorthy, as he then joined a private company to work on the Petronas Railway Project from Kuantan to Kerteh for a period of five years.
Today he is an independent consultant helping friends and contributes to the railways, locally and internationally.
In 2016, the British Institution of Railway Signalling Engineers (IRSE), awarded Sathyamoorthy a medal and certificate in recognition of his substantial contribution to the work of the institution. IRSE is the professional institution for those engaged in or associated with railway signalling and telecommunications, train control, traffic management and allied professions. Sathyamoorthy is the advisor to the Malaysian IRSE branch.
Striking a balance between work commitments, extensive travels around the country and being a responsible husband and father was a challenge, he admits.
With his grandchild
“My wife and I gave our best towards raising the children. In fact, when our children were very young, we did not leave them alone under anyone’s care. We managed to build a strong, open http://online-pharmacy.org relationship with our children, who are all grown up now. But whenever they seek our advice, we continue to give them our time. Only one son is in Malaysia, and he lives nearby. My other son works in Canada while my daughter lives and works in America.”
The man’s effervescence and easy sense of humour disappear when he talks about the passing of his eldest son to illness, two years ago. “It is very difficult coping with the loss of a child and it was especially so for me as he was a good companion and we did many things together. I’m now left with only the many shared moments we had.”
Despite the setback, two heart attacks and two bypass operations, and a knee injury that causes him to hobble, Sathyamoorthy hasn’t slowed down and remains fiercely independent.
It’s often said that we don’t appreciate what we have until it’s gone. It will not be the case with this stalwart.